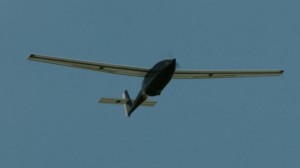 The US Navy Naval Research Laboratory has just completed the test of a new kind of UAV (Unmanned Aerial Vehicle) which, thanks to a battery powered by hydrogen, has been able to fly for 26 full hours without any interruption, while carrying a small payload weighing approximately 2 kg.

The Ion Tiger vehicle, apart from using a hydrogen cell as a high-energy fuel, also relies on al electric propulsion system, which guarantees a complete absence of noise during its operations. The system’s total weight is approximately 17 kg, and it can carry a payload of up to 2.5 kg. Its hydrogen fuel cell provides approximately 550 Watt power, which is around 7 times the energy supplied by a conventional battery of the same weight.

Aside from low energy consumption, the possibility of operating silently makes it perfect for applications which require flexibility and quick operation, and most of all, extreme confidentiality. Thanks to these characteristics, the Ion Tiger unmanned vehicle is perfect for aerial video surveillance operations, even in long range.

The result achieved by Ion Tiger, with a continuous flight time of 26 hours and 1 minute, breaks the previous record, held by the same vehicle, which during an unofficial flight was in the air for 23 hours and 17 minutes.
Furthermore, this record almost triples the result obtained by the hybrid-powered SUAV (Small Unmanned Aerial vehicle) Puma, which only one year and a half ago flew for 9 hours; Ion Tiger’s achievement also functions as an indicator of the huge potential of hydrogen fuel cell power for this kind of vehicles, which can be used in several fields such as security, aerial reconnaissance or scientific aerial photography.