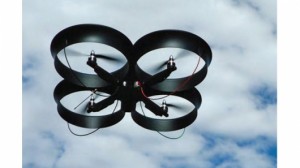 Cyber Technology, an Australian manufacturer of UAV (Unmanned Aerial Vehicles) has just introduced its latest creation, a radio controlled mini helicopter equipped with four rotors for a higher maneuverability, which make it suitable for being used in urban environments where space is tight.

This micro helicopter goes by the name of CyberQuad, and it sports four ducted rotors, with the duct acting as a protection which allows usage even indoors, without danger that the rotors might hurt someone. This kind of rotors generally requires a higher focus on stabilization equipment, and generally has a shorter operating range and a lower payload capacity when compared to a helicopter.

CyberQuad’s peculiar structure brings together the small size and the safety of ducted rotors, with agility and ease of use of a normal mini helicopter. It can carry a payload of up to 1.5 Kg of video and photo cameras, or sensors for detection of harmful gases or polluting agents, and its rotors are not generating any sparkles, allowing for use even in presence of flammable gases, for example as a support to fire squads on rescue operations or while fighting a fire.

Just like a normal helicopter, CyberQuad has vertical takeoff and landing, and its limited size (53x53x16 cm) and weight allow for easy transportation and operation. Its peak speed is approximately 65 kilometers per hour, and it can fly for a period between 25 and 40 minutes.