Skip to content
Home » Controlling a drone from your iPhone 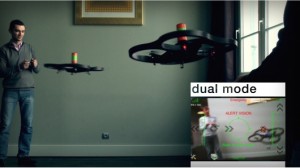 There are iPhone applications to do basically anything that can come to your mind, and it was an easy bet that one day, the Apple phone could step into the radio controlled unmanned helicopters field. In fact, manufacturer Parrot has just introduced its AR.Drone, a small helicopter equipped with two digital video cameras, which can be controlled through your iPhone or iPod Touch.

The system is still in its early stages. And it should be available for retail sales in the second half of 2010. The helicopter sports 4 rotors, which can be covered by a hull to allow for indoor usage, and a flight stabilization system to guarantee high quality imaging, while controlling its route remotely thanks to the iPhone motion sensors.

Designed for a non-professional usage, but suitable both for leisure and for aerial surveillance operations, the AR.Drone miniature helicopter has a weight of approximately 400 grams, and a carbon fiber shell, and is powered by a built-in Lithium-ion battery, which can provide enough energy for 15 minutes of flight time.

Parrot, the manufacturer of this system, has designed it for usage within augmented reality video gaming systems, where AR.Drone can detect targets or other drones, and fire rockets (not real ones, of course!) while fighting a virtual battle.

Images captured by the front camera are displayed on your iPhone, while its motion sensors will transmit motion information from your phone to the drone, thus guiding it in a realistic way. When you take your fingers off the screen, an autopilot system will keep the drone hovering at approximately 1 meter height, and in case of lost connection, AR.Drone is automatically and softly landed.

At the moment, no information has been disclosed concerning the device’s price range, but sure enough some info will be given before launch.