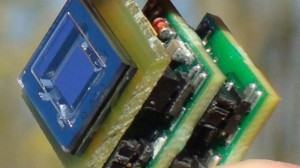 During the past month of December, at International Electron Devices Meeting which was held in Baltimore, Belgian researchers from IMEC, the largest European research centre in the fields of nanotechnologies and nanoelectronics, have presented a small piezoelectric sensor which can harvest power from vibrations caused by pressure or motion.

Thanks to its characteristics, this sensor is capable of generating enough power to gather various types of data, and transmit it to a receiving station every 15 seconds.
The data type can vary depending on the equipment used in connection: for example, by teaming up this system with a sensor for air pollution detection, it is possible to obtain information about the quality of the air; alternatively, using it to power a GSM transmitter installed inside a car, one can obtain power supply from the vibrations caused by the vehicle’s motion, and use the power to transmit the intelligence gathered.

The sensor presented by IMEC researchers has provided up to 85 microwatts, a record figure for its small size, by using a MEMS technology, which helps keeping costs to a minimum by using aluminum nitrate, a material which allows for a performance three times higher than normal piezoelectric materials such as lead zirconate.

Furthermore, MEMS technology allows for a boosting of integrated circuits, thus giving the possibility of creating autonomous systems on a single chip. During first tests, the energy gathering system has been connected to a small wireless temperature sensor and subjected to vibrations. The sensor has successfully been able to gather its data, sending it to a receiving station at 15-second intervals.