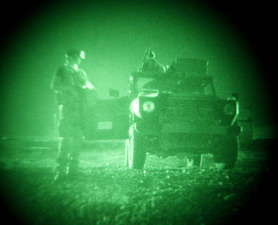 Is a Night Vision Phone Camera a reality? Well, not yet to be honest… but a team of researchers from the University of Florida is working on a research project aimed at the development of a system which might ensure that video and photo cameras mounted on our ordinary mobile phone could work much better in conditions of low lighting.

This system consists of a thin layer of film, containing LEDs, which could be applied not only to the camera viewer and display of a phone, but also find several applications for personal use and for security on the road. This will make the Night Vision Phone Camera

For example, just think of how much we could benefit from having this film used on the windshield of our car, or on our glasses: a dramatic decrease of car accidents in low illumination conditions, and an improvement of living conditions for the visually impaired or for anyone having problems with night vision.

At the time, night vision systems are using a huge amount of electricity, and heavy glass lenses; this makes their usability in everyday conditions quite limited. On the contrary, using a LED film like the one that Florida researchers are working on, would reduce weight and encumbrance of any night vision equipment, making it available not only for personal use like in the examples above, but most of all in the military field, dramatically improving maneuverability in the current infrared night vision systems.

The research project should provide results within just 18 months, meaning that within a couple of years we might be seeing mobile phones that can be used as infrared cameras; with an improvement, this technology might be used also to detect and measure heat, making it very useful in the military, where it can be employed to detect enemies in the dark thanks to their body heat, or even at home, where we could just place our phone on our forehead for a while to measure… fever!