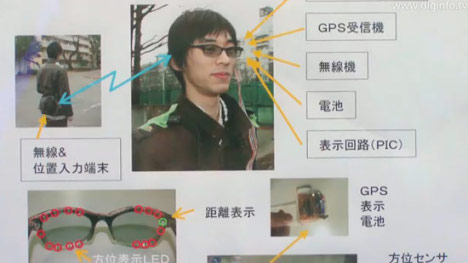 During the recent Wireless Japan expo, the Tokyo UEC (University of Electro-Communications) has presented the prototype of a wearable personal navigation system, which can easily be worn as it is contained inside a pair of special glasses.

How GPS navigator work with glasses?

In fact, we are not talking about a normal pair of glasses, but rather a microscopic GPS navigator which only sports the shape of a pair of glasses. Inside the frame there are LEDs, mounted following a circular pattern, which would turn on according to movements of the wearer’s head.

The frame contains, along with LEDs and direction sensor, also a GPS antenna, a battery to power the whole system and a miniature computer. All that the user has to do is enter the final destination, and when the GPS antenna detects the position of its current location and that of the destination, direction sensors will guide him to reach it along the right way, in the fastest possible time.

Developed by UEC’s Nakajima Laboratory, the GPS navigator in a pair of glasses has been put to the test during a test run on pedestrians in the Tokyo traffic, and the test was successfully passed.
The advantage of this navigation system, if compared for example to mobile phones equipped with GPS navigator, lies in the fact that while with the latter one always has to keep an eye on the handset to follow the road, thus increasing the risk of small accidents, with these glasses they would just have to follow the direction shown by the LED inside the frame, without losing touch with dangers of the road and keeping eyes fixed on the direction to take.