Skip to content
Home » Finland, a 3D speed camera fines you in seconds 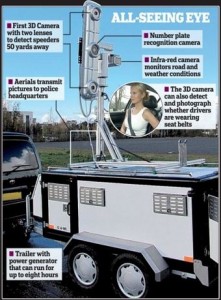 Scandinavian countries are often taken as a benchmark for the accuracy and honesty of their citizens, especially when they get behind the wheel, a situation in which they tend to show their respect for other drivers, for speed limits and for safety on the road.

Obviously though, not all of them comply with these rules. Precisely for this reason, in Finland, which has always been at the forefront of technology (think of Nokia, for example), the highway police has just been equipped with cutting-edge traffic cameras, able not only to detect when you are pushing too hard on the gas and exceeding the speed limit, but also to check your insurance and even tax situation!

This futuristic speed radar features cameras which, in addition to measuring speed, can also read the license plate number. Connected via satellite to the police database, the system checks that the car insurance associated with that number has been regularly paid, and even if the car owner has unpaid taxes or fines.

Also, the three-dimensional cameras of this advanced system, called ASSET (Advanced Safety and Driver Support for Essential Road Transport) and funded with about 8 million euro from the European Union, are able, thanks to their sensors, to take pictures of the inside of your car, to verify that the driver is wearing the requisite seat belt. Thanks to its sensors, then, it can also detect other violations, such as the non-observance of safety distances, which can often cause fatal accidents.

The Finnish authorities are hoping that such equipment will further increase road safety by reducing the number of accidents caused by speed or risky behavior, in a country which anyway is always on one of the top positions of the worldwide ranking for road safety. But you know that on the road, caution is never too much, even in Finland.