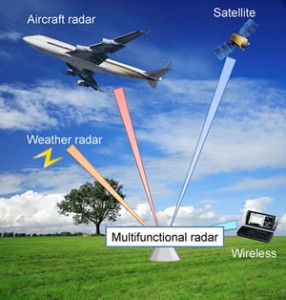 Anyone who found themselves away from the nearest sign of civilization, for example in the mountains or on a remote island in the middle of the ocean, knows perfectly that even trying to use a mobile phone could be a major problem because of lack of network signal. Just imagine how one could ever think of connecting to a wireless network.

To solve this problem, and ensure wireless coverage even in the remotest corners of our planet, Fujitsu unveiled its GaN-HEMT project, a new power amplifier that has reached a record level of output for wireless radio and telecommunications.

Thanks to this wireless amplifier it will be possible to multiply the power of a wireless communications system up to six times the current level, managing to bring the wireless signal in areas that are currently cut off from the network because it would be impossible to lay down optic fiber cables.

The GaN HEMT (Gallium Nitride High Electron Mobility Transistor) system is able to provide a transmission speed of about 10 Gbps, a speed at the same level of the best optical fiber networks.

So far, laboratory tests at Fujitsu have succeeded in developing a power of 350 milliwatts using amplifiers of this kind, operating on the C and Ku bands which, unlike W-band millimeter-wave transmissions, do not suffer significant loss of power caused by weather, for example during a tropical storm that could greatly reduce the signal strength on a remote island.

In the coming months, the engineers at Fujitsu will work to improve the signal strength and stability, using this technology to create trunk lines that would carry high-speed wireless signal to provide an access without geographical limits.