Skip to content
Home » SpyNet Laser Trip protects your works of art. But maybe only if they are false! 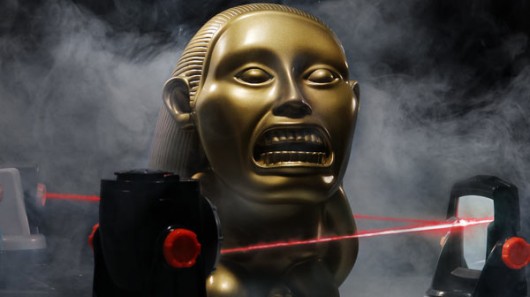 A new really cheap product has been launched on the market. A device that, if you purchased it, would raise the envy of those among your friends which are fans of espionage movies, or MacGyver as well. It’s called SpyNet Laser Trip and what it does is to create a laser network, just like that one you usually see on TV or in the movies when certain valuables have to be protected, such as works of art put at the center of a richly decorated room in a museum.

The system consists of a Class 1 laser transmitter, a receiver and two mirrors. The four pieces can be arranged in virtually any configuration, as long as the laser beam can reflect unimpeded from point to point, ending up at the receiver. The device can also be implemented with other mirrors, depending on the user’s desire. In the case where an obstacle is placed between a point and the other, an alarm will sound.

Do you feel like you are in a spy movie? Do you now feel smarter than the most clever Lupin? Do not get excited! The system does not include the steel casket doors which would presumably close to stop the thief. This device is actually a toy, although it could easily fool the less experts in the “surveillance” matter. Maybe it can be used as a deterrent, but not as a true surveillance system for your valuables, which you had better keep in a safe.

If you really need a device that can detect intruders in your home, you should rely on professional tools suitable for this purpose, as a video bug with no range limits that, with a simple call (for the audio only) or video call (for the video function), allows you to see, and listen to, all that is happening in the environment in which it is installed, in real time.
The ideal device, in short, to monitor your home and your belongings, as it is simple to use, more than the toy laser system, easily concealable and relatively low cost.