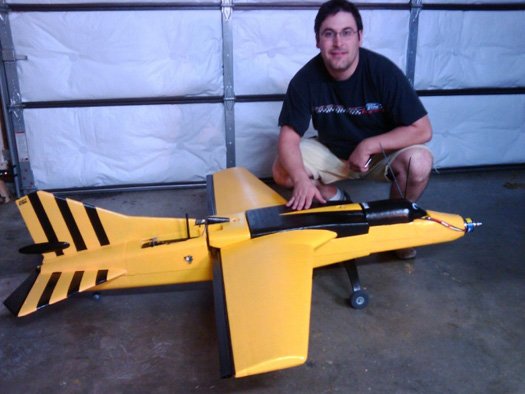 Mike Tassey and Richard Perkins, respectively, a former cyber security contractor and a former engineering systems consultant at the American Air Force, have shown, during a security conference, held last year in Las Vegas, a do-it-yourself drone aircraft, 6 feet long (1.80 m c.ca) and weighing 14 pounds (about 7 kg), named WASP (wireless aerial surveillance platform). So far nothing new, but this mini aircraft is capable of sniffing out Wi-Fi networks, cracking passwords automatically and even eavesdropping on conversations, posing as a cell tower.

The WASP is constituted by a drone no longer in use in the army and by a series of other technologies mounted by the same builders, including an HD video camera, a small Linux computer, which includes a dictionary with 340 million words to force the password of different systems, and eleven different antennas. The UAV is also independent, but requires human guidance for takeoff and landing. Once airborne, however, it can fly along a pre-set path, searching for data with a weak defense.

The do-it-yourself drone was equipped by the two creators, following what has been learned by another hacker, with a system that allows to pose as a GSM cell tower, capable of tricking phones into connecting through WASP rather than their carriers

Tassey and Perkins argue that the WASP was constructed to show how easy it is, and how vulnerable we are in an era where the technology we use every day has evolved to the point of exposing users to risks, even when they are unaware. A sort of warning, in fact, but there are others who see the potential uses of the platform in the military. Meanwhile, it would be good to adopt a jammer to safeguard a little bit of privacy against violation.