Skip to content
Home » Too many mosquitoes? Be careful, perhaps they are watching you! 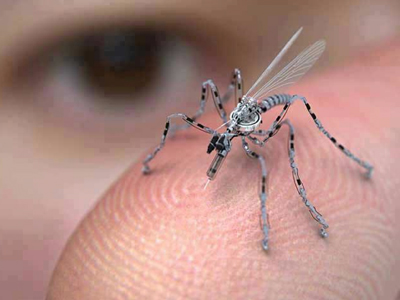 We have already written in this blog about drone insects, real insects equipped with microcameras and microphones to act as bugs or totally artificial insects, able to perform these same functions. Beetles, bees, flies, dragonflies, and other insects with a big size, indispensable for transporting the mini equipment which requires a certain energy and strngth that maybe other smaller insects could not endure, until now.

A CGI mockup has been created of a mosquito drone that soon we might see flying in our skies for aerial surveillance, and not only for that purpose… The model, in fact, besides mini cameras and microphones, has also a needle, able to take DNA samples from the chosen person, or to inject a micro RFID into the body, a system which allow the geolocation, through radio frequency identification.

Science fiction? Not really if you consider, for example that, in 2007, during a protest against the war in Washington DC, Vanessa Alarcon, one of the activists, saw a strange flying insect that looked like a dragonfly, but definitely it wasn’t and, moreover, in 2006, the development of micro UAVs (unmanned aerial vehicles) by the CIA (since the ’70s) was reported by Flight International.

Many questions arise regarding the uses one can make of these jewels of technology that while on the one hand represent a big step forward in the defense of the country, on the other they may end up in wrong hands. Instead of being used for aerial surveillance, for example, they could be emplyed for less noble purposes. What about if the mosquito drone was used to inject deadly poisons without anyone noticing?