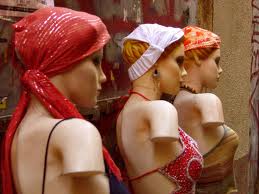 The merchants love it already. The dummy with perfect shapes that occupies all the shop windows of the world could soon become the best friend of the shopkeepers because it may report in real time, not only the presence of thieves and criminals, but also age, gender and tastes of customers. These are spy mannequins of Eye See line, humanoid dolls equipped with miniature cameras for eyes. They record, thanks to facial recognition software, the characteristics of the passers-by and send the data to a software similar to those used by the police to identify criminals.

The dummy bionic technology was launched in 2010 by the Italian Almax Spa together with Kee Square, spinoff of Milan Polytechnic. So behind the silhouette of polystyrene could be hiding a real security guard. Unlike traditional surveillance cameras that record from a well defined corner, the dummy, observing the client, is able to capture more information and creates a database of profiles guaranteeing the anonymity. The influx of the customers, according to the preferred time band, which objects attract them more, the dwell time in front of the shop window and other factors, make possible to customize the service. The CEO of the manufacturer, claims that there aren’t dangers to privacy because the images are only analyzed and not stored.
The European and American legislations allow the use of cameras for security purposes, when customers are aware of these systems.

Meanwhile, the Italian engineers, fathers of this invention, are trying to give to the mannequins even the ears in order to record, through microrecorders, comments and criticisms.
Currently each dummy costs about 4000 euro. Some copies have already been sold in some European countries and in the U.S.. In fact, the eccessive expense for the implementation of this technology could easily be avoided with the separate purchase of professional video and audio bugs that allow you to get guaranteed results.