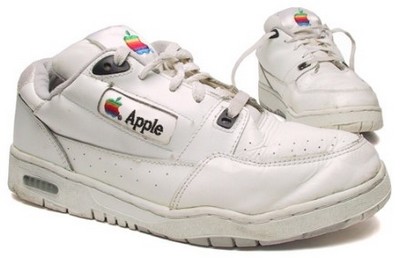 Steve Jobs in the 90s gave to Apple employees a pair of white sneakers with logo on the tongue and the word “Apple” on the side. Last autumn the staff of the bitten apple had fun imagining, between reality and fantasy, the next big company products. Pets robot, glasses, innovative bikes and someone hypothesized a pair of sneakers: the iShoes.

The company has filed to the U.S. patents office, a request for a system of sensors and connectivity inserted in footwear. Unlike smartwatch or other wearable devices, smart shoes don’t constitute an extension of your smartphone, but they are primarily an instrument of self-tracking for runners or simple pedestrians (it also speaks of boots). The sensors can be inserted in the heel or take the form of a layer which passes through the shoe. In the patent it’s stated that the iShoes will be equipped with accelerometers and pressure sensors integrated in the sole that allows the monitoring of the performances, but also, and above all, the measurement of parameters such as the posture, the position of the foot in the shoe…It also speaks of the measurement of shoes level of wear that make impossible to wear shoes that are too worn ensuring a healthy posture. The data, once collected, are transferred to other personal devices such as smartphones or tablet.
This expedient is considered by many as a ploy to push the sales that could be taken into consideration for many garments of clothing or objects of any kind.

The wearable devices represent an horizon of the market more and more close. These have always been a priority for control and monitoring. An example closer to the concrete can be represented by GPS trackers or bugs that, due to their small size, they can be implanted almost anywhere: belts, ties, glasses watches, necklaces…The small size didn’t reduce the potentialities, indeed they were amplified.
DVR “All in one” of Endoacustica, for example, allow to you the audio/video recording and, considered its minimum size, can be hidden almost anywhere. The DVR is able to make audio and video files of high quality, thanks to the hight resolution component video and to the powerful microphone preamp. Not only, with “All in one”, you can take great pictures in high resolution, with just one click.