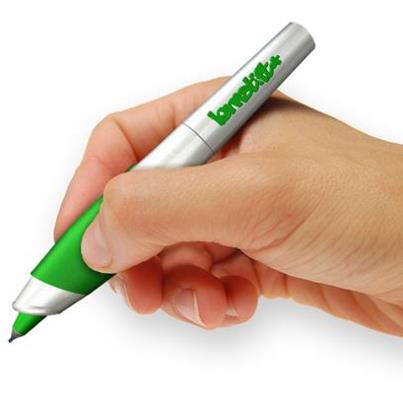 The pens are, from antiquity, everyday objects. They come in different types: classic, technological, fashion, made of precious materials…Depopulated in the market for some years now the DVR Pens Endoacustica, pens that, in addition to the normal writing, are able to record audio and video of good quality allowing you to store school lessons, interviews or to monitor situations in a discrete manner. Once created the file can be exported in comfort on the PC through a USB cable supplied.

Despite the spread of computers in many occasions it is necessary still using the pen and, accustomed as we are, to the automatic correction is likely to make a bad impression in terms of grammar knowledges. Someone has thought of this kind of writing problems creating Lernstift, a pen that vibrates every time it detects that you’re writing something wrong, either a single letter or an entire word.

The pen has been created by an Austrian couple after noting the efforts of their son to learn to write. The tool is presented as a normal pen of color green and white, but inside are implanted sensors that can detect a series of variations in the way the words are formed. Errors can be reported in two ways, “calligraphy” or “orthography” and when they are detected, the device makes a buzz.

By the way some people talk about “educational tool unique and effective”, others instead believe that this kind of gadgets risk to “delete our grammar expertise”. At the time, Lernstift is still under development, but it seems that in the next weeks will launch a crowdfunding project with the aim of raising funds to commercialize it on a large scale. A project certainly to improve that still leaves perplexed linguists.