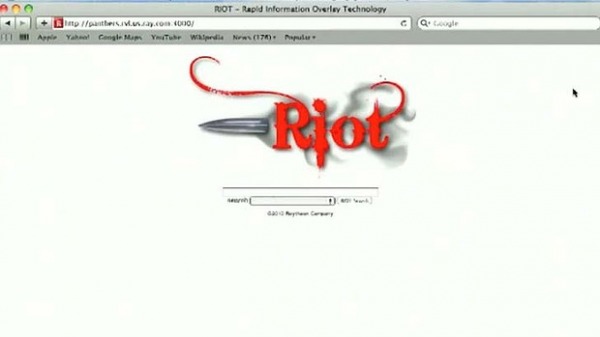 “The Guardian” has revealed a few days ago the existence of Riot (Rapid Overlay Information Technology, but also like a “riot”, suggesting that the product can be used as a kind of social control). The software was developed in the USA by Raytheon, one of the greatest companies working in the field of military defense, able to obtain data (data mining) and provides predictions on the behavior of U.S. Citizens. At the base of the software there are the social media like Facebook and Twitter. Usually to know this type of information is used USB pens or small systems that allow you to know each data is inserted into the PC. Riot is a kind of search engine able to locate the users of the social, to show their photos, where and when these were taken and it can be transformed into a real instrument of control, a “Google-spy”. It works by using complex algorithms to “read” billions of information on the web.

At the moment it seems that the software isn’t sold because different aspects preoccupy the privacy. For example you can follow people and their habits, and then predict their behavior. In addition, users often don’t know that their data is available to everyone and then would be needed an information campaign for correct use. And that’s not all. Through the Riot graphical object browser you can correlate people, events and relationships.

For now, some similar information can be obtained through the twitter scraping (selective extraction of tweet) or search engines designed specifically for Facebook. It also seems that the FBI is developing software for social media research.The controversies about privacy don’t lack in these cases. David Brin, science-fiction writer in 1998 had declared: “We are already too far away to be able to regulate the use of video cameras, you should adjust to the fact that we will lose part of our privacy, but to the advantage of greater security”.