Skip to content
Home » U.S.: a mosquito for the military espionage 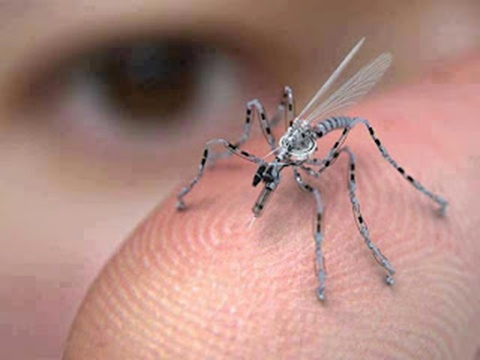 A small insect like a mosquito is in reality a very powerful micro-drone could even kill. It’s the latest toy of U.S. Army that seems to use it since 2007, although in the early years has denied its existence. An insect drone, controlled long-distance, with a camera, microphone and syringe studied in the GRASP, laboratory of the University of Pennsylvania.

“Micro air vehicles” (MAVs) are called in the important center of research and are designed starting by just small animals: their characteristics and aerodynamic capabilities perfect. According to reliable sources it’s able to extract DNA or inject RFID localization devices in the person-goal, causing a sensation of pain almost imperceptible, comparable to that caused by a normal mosquito bite. Obviously the uses to which it may be intended by the secret service are many: it can be used as a spy, being equipped with a camera and microphone, but also as a “silent killer” by injecting into the chosen victim, powerful poisons available in the market, which can cause cardiac arrest, suggesting a natural death.

As is clear to know, the “mosquito drone” can penetrate everywhere without being seen through a tiny crack and remain in an environment for months without arousing suspicions.

Military technologies are advanced and often would become very dangerous if put into circulation. In order to this, it’s mandatory considering that the majority of these tools are kept secret. At the moment we known that England, France, Holland and Israel could have microdrones.