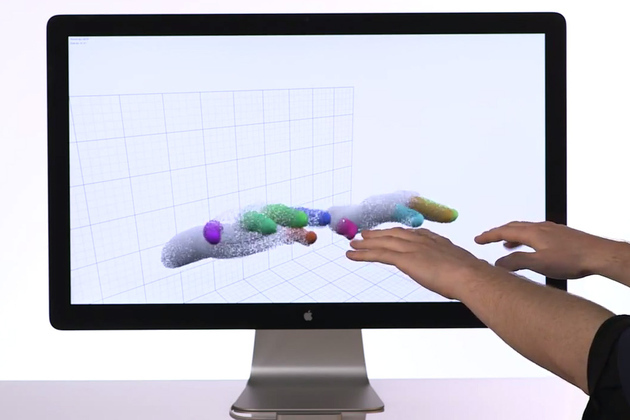 From time immemorial, the man try to interact as much as possible with machines. Now have been patented powerful tools used by law enforcement to look through walls, for example, or the more and more used of biometric access systems.

The new frontier is Leap Motion and will be on the market within a few months. It’s a box to be placed under the PC or TV screen and allow you to enter physically into the device. The Leap Motion works roughly like Kinect, the system webcam for the Xbox 360 console from Microsoft. Thanks to a field of infrared rays, projecting upwards and translates the gestures into commands interpretable by the computer.

Long about 76.2 mm, a little more than a USB, occupies the same type of port, through which it interfaces to a PC or TV, and is capable of detecting the movement of the hands and of individual fingers in a field of view of 150° of amplitude, with a speed of 290 frames per second and a detection accuracy of the movement of only a hundredth of a millimeter.

Therefore allow you to move files, open documents, enlarge a photo, moving your hand in front of the screen. The idea is of Buckwald Michael and David Holz founders of the company of the device. Buckwald has worked for several years in the three-dimensional graphics struggling in having to work hard and for a long time with the mouse to get good results. So the two have had the idea to enter into the program, making them easier the work.

The project has quickly gathered over thirty million dollars in funding and more than forty thousand developers have registered on the site to start creating the first applications, already numerous.

This item could be the step of overcoming the relationship man-machine no longer divided by a screen, thanks to simple motion sensors and technologies that are increasingly precise and low cost. In fact the cost would be around $70. Leap Motion developers are discussing with the giants of consumer technology to directly integrate the device in laptops.

The new touchless method could bring significant benefits not only for graphic projects or action games, but it could have valuable applications in medical and scientific field.