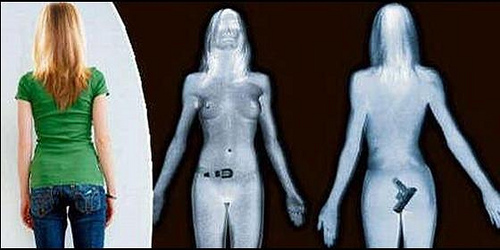 There are millions of travelers each day that are subject to monitoring through the body scanners or, more technically, millimetral scanner. These security tools “lay bare” the passengers to check what is hidden under clothing.

In the beginning these instruments were introduced to avoid the search “by hand” by the agents of airports. Until a few years ago, the X-ray detectors could see only metal objects possibly present under the clothes.
Millimetral scanners, however, are lighter radiation, but at very high frequency (millimeter waves, in the order of Terahertz (112 Hertz)) crossing the clothes, but they’re partially reflected from any object, even non-metallic, and skin. The opaque materials (for example clothes) become transparent with this device allowing to distinguish any hidden objects.

In the most popular devices in the U.S., the millimeter-wave are transmitted simultaneously from two antennas that rotate around the body. The energy of the waves reflected from the body or from other objects is collected by two detectors placed diametrically to the object and then used to reconstruct a 3D image.

The scan lasts 2-3 seconds and raises some concerns regarding privacy. People scanned appear virtually naked and then you can see everything including any breast implants or piercings in sparsely exposed parts.

At this concern was answered by putting the operator that observes images in a room from which he can’t see passengers directly. Furthermore, at least in the U.S., passengers can refuse to pass through the scanner, preferring to be searched by an agent. The system also doesn’t provide at the time the ability to save and store images.

Contrary to what one might think, electromagnetic waves used have a power 10 thousand times lower than those of a common mobile phone and aren’t considered ionizing, ie aren’t able to break the bond that unites electrons and nucleuses in a atom, therefore they aren’t overly harmful to health. It could be said that privacy and health are slightly sacrificed for security. In fact, the biometry is often applied to the surveillance industry, just think to the fingerprint locks increasingly used both in private companies and in public places. These allow for greater security due to the singularity of the recognition and offer alternative management methods used in the absence of electric current.