Skip to content
Home » Fish-robot will patrol the Thames River 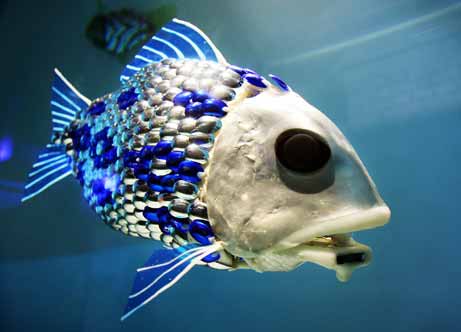 It’s environmental surveillance, the new frontier crossed by the fish-robot that will be released, in the coming months, in the Thames in order to sniff out pollution.

Scenes like science fiction movies are recorded during the tests in the water. The robots will be released in groups of five in order to provide a mapping of the critical points and pollutant elements. The search will rely to the sensors built-in each of these strange fishes, to the GPS system and a micro camera installed in them, ensuring the exact identification of the area in which they are found. The data will instead be transmitted through Wi-Fi network, used also for a “dialogue” between these fishes-robot. The project has cost about 22,000 euros.

The fish-robot seems like a carp, is one meter and a half and swim at a speed of 1m/s. Every 8 hours back to the base to recharge the batteries and start over.
If the experiment will be successful, the fish may be used to combat seas pollution. The road of fish-robot was follow a few years ago, but the researchers encountered a problem: the previous version wasn’t able to swim on their own. Today, this issue should be resolved.

Once again, the satellite tracking systems together with the most modern video control technologies are fundamental in the field of surveillance in small houses such as in the open sea.