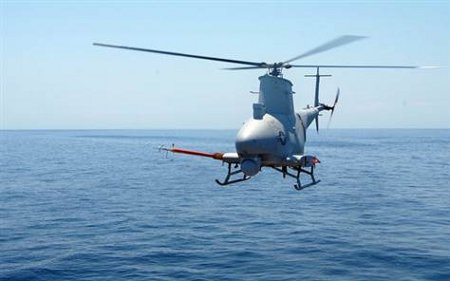 A helicopter drone? The land is covered for almost 70% of water, so it makes perfect sense to monitor these huge sea expanses. Nevertheless, it is a very difficult task to be performed, as it would require many human efforts and excessive costs. In addition, the surveillance of these areas would never be effective enough, given the enormous size of the areas to be put under control. Thanks to advanced technologies, however, now-a-days it is possible to control vast sea expanses. The United States Navy, in fact, are using helicopter drones to hunt modern times pirates, a plague that affects different parts of the world, especially the coasts of Africa and Asia.

Helicopter Drone – A Reality for Spying

Today pirates are not very different from their colleagues in 1700, although the technology has forced them to refine their defense techniques. The most affected vessels are stationary ones, because they are easier to attack and, although several boats are today equipped with electrified barbed wire to defend themselves, the pirates are smart enough to find a solution to circumvent these defense techniques, using mattresses and insulating material.

That is why helicopter drones tested by the U.S. Navy are the ideal device for aerial video surveillance against pirate attacks. These aircraft, also known as “Fire Scouts”, are also equipped with “electronic brains”, which are capable of automatically recognizing the small vessels of the pirates thanks to a very precise 3D laser system, which, according to designers, would reduce the risk of false alarms.

But how do these drone helicopter work? Their technology, called LIDAR or LADAR, allows to bounce millions of laser pulses off distant objects in order to create a 3D image of boats on the high seas. Their software, then, is able to compare the 3D images obtained with the profiles of pirate boats already recorded in a database. The question that comes naturally to ask, however, is how they will be able to recognize the pirates if they use common vessels.

According to Ken Heeke, project manager, the problem does not exist, because once you send the 3D images detected by the LADAR, human operators will then verify what kind of boat it actually is. This is, in short, a tool that helps man, but which does not replace him entirely.