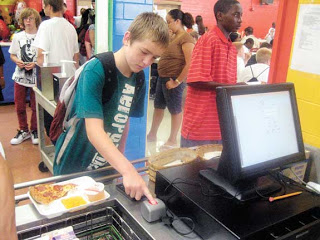 Access control systems that use the biometric scanner is becoming more and more part of institutions and companies because they allow a high degree of safety and the reduction of physical control procedures.

From some days, no badge or card for teachers and staff of the high school “Plinio Seniore” in Rome. The school principal has imposed on the employees the use of biometric scanners to signal the entry to and exit from the building.

The trade unions together with the interested have been moving to contest the use of these tools because they cast doubt on the effective functioning of the same and, first of all, they criticize the lack of an official informative that authorizes the school princypal to use their fingerprints, appealing to the Privacy Act. Very questionable visions.

In England are the same students to be recipients of these new technologies. The protagonists are the children of a school in Berkshire that, since the beginning of the year, enter and leave the school using fingertips. In fact, was introduced a biometric system of identification through fingerprints. At the beginning and in the end of lessons, each student places his thumb on a sensor, installed at the entrance of the institute, to allows his identification.

The school principal was reached much consensus by parents of children given the increase of security that this entails. The teachers had no hesitation, thanks to this system they save valuable time required by the roll call in classroom. For now, the project is an experiment, it lasts one year.

In Pennsylvania, instead, for some years now is in use a system that allows to the students to pay the cost of meals at the school, simply using fingerprints and accumulating a debt paid periodically by the families.

Elsewhere, for example in the schools of the New Jersey, are in function more complex biometric systems that involve the iris scan to allow access to the institute, only to authorized personnel and to members.

The biometric control is a good example of how technology is combined with safety.