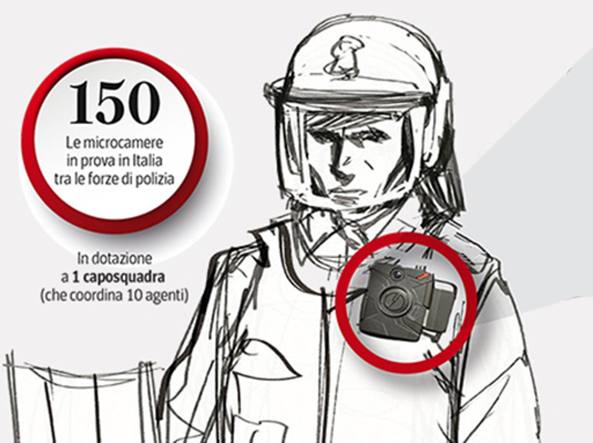 The small button spy camera embedded on the uniform of the police officers who perform public service. Devices pinned on his chest to film what happens during the demonstrations, but also inside and outside the stadiums. After the controversy for the riots and violence increasingly frequent during the parades and especially during football matches, the police has decided to speed up the procedure that allows the use of recording devices that can capture culprits and responsibility.

The choice includes the use of 150 high definition devices. The foremen of the departments will wear the button spy camera. Each of them will oversee a group of ten agents and this means that the systems will cover at least 1,500 men.

Of course, the range is much wider and in case of critical situations it is expected that the nearest official takes place in order to support what is happening with the obligation to take what all the parties involved do and therefore also with the possibility that multiple cameras record the scene.

The idea is to start with the activities of public order, and then involve other departments, such as that of police cars so that the agents involved can film the actions. The devices have a digital technology and send the material to a secure server that will be available for the judiciary in case of accidents or for the assessment of other possible crimes by both the protesters and the police.

It was one of the largest police unions, the first to call for the use of the cameras. And to strengthen its opinion, it distributed to police officers about eight hundred spy pen, devices that allow you to have images and voices of what happens during the service. An initiative initially regarded with suspicion by the leadership of the Department and now endorsed by most sophisticated instrumentation and with a targeted planning.
“It’s a mistake to think that the camera is only used to guarantee the cops.

Be able to document what happens in the street is a form of transparency especially for citizens. The union secretary says. “We are convinced that the cameras will be a strong deterrent to any form of violence, we are confident that this initiative will enable everyone to go to watch the football match and participate in events with more tranquility”.