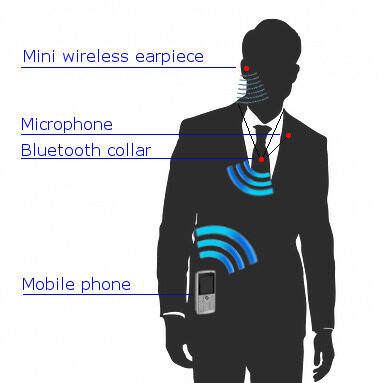 An invisible earpiece, just a few years ago we thought that could only be seen in action or spy movies, and that have become widespread, or at least much easier to find on the electronics market, at affordable prices.

An example of this kind can surely come from wireless earpieces, that we generally see used by secret agents on the big screen, but that can instead be used for a range of applications much broader than the mere exchange of information.

Certainly, in the security and surveillance field, for a detective or a police agent on a mission, and especially in the military for Special Forces members, it is absolutely vital to stay in constant touch with an operating center or a base camp without raising suspicions in criminals or enemies.

How invisible earpiece is connected?

Some earpieces are connected, generally via Bluetooth, to a GSM watch with an embedded SIM card, thus creating a real listening and transmission system which can be used to transmit information at unlimited distance. The benefits of this kind of devices, as well as of radio connected earpieces, can be reaped by students at an exam, or workforce operating on large areas such as construction sites, mines, agricultural properties or when shooting movies on the outside.

In the movie business, the actors themselves, who may forget a line every now and then, may benefit from having a distant prompter while shooting an open air scene; and the good old prompter pit used in theatres may be obsolete thanks to this advanced solution.
A bit of the old romance of theatres would be lost, but the artist will have the chance to perform at their best and the audience can only be satisfied. As you can see, progress is running fast, and is available to everyone!