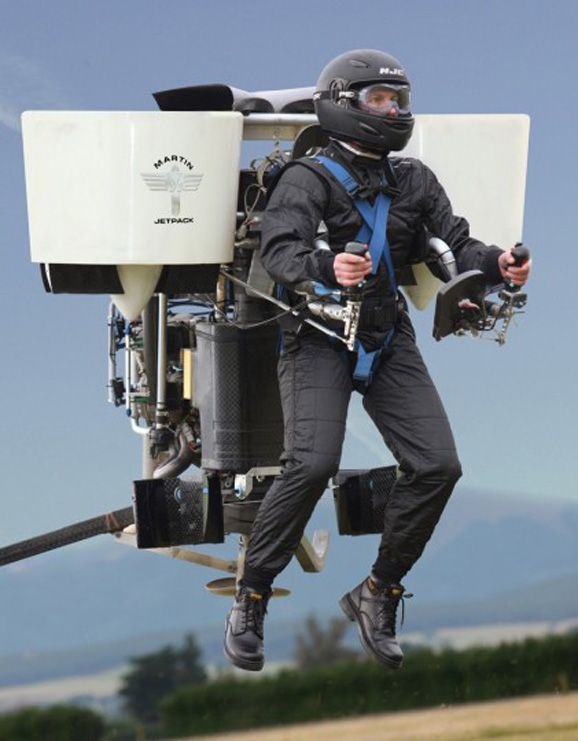 Flying man? Human flight device is nowadays really possible. Or at least, it is for those who can afford to spend at least 70000 dollars for this toy, which can turn anyone into a real jet man into a flying man.

Manufactured by Martin Aircraft Company, a firm based in New Zealand (in Christchurch, to be more precise), the personal Jet Pack has a power of approximately 200 HP, and weighs around 115 kgs.
Thanks to its twin engines, it is capable of covering a distance of about 45 kilometers in half an hour with a full tank load. In order to use it, there is no need to have a pilot license, all you need is the 70000 dollars on its price tag, and you are ready to experiment first-hand the thrill of human flight device.

How can a flying man take flight through a human flight device?

The latest evolution of Jet Pack can reach a speed of approximately 90 kilometers per hour, while taking its pilot to a height of over 2400 meters above sea level. At the current stage, Martin Aircraft has just started industrial production of what should be its commercial spearhead, and the first deliveries to their well-heeled customers should take place somewhere near the end of the current year.

Obviously, Martin Aircraft’s clientele is not limited to rich clients who wish to try human flight, but most of all the New Zealand manufacturer caters to other fields: for example, rescue and first aid services, or armed forces which might use it for reconnaissance missions or recovery of wounded personnel in war zones, especially where the terrain is particularly rough and unsuitable for conventional means of transport.