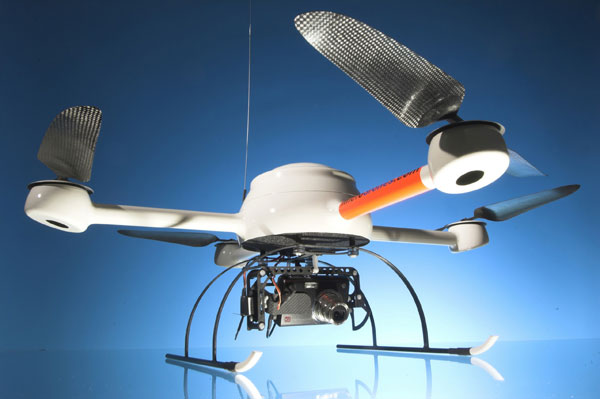 Surveillance Helicopter? The Canadian aerospace industry Bombardier, more popular for its small to medium sized passenger aircraft, has decided to venture into the UAV (Unmanned Aerial Vehicles) arena, with the prototype of an unmanned helicopter designed to be used as a protection against a possible pirate attack against private or commercial vessels.

What is a surveillance helicopter?

Crows Nest, as it is named, sports a relatively small size (only 30 x 60 centimeters) but in spite of this, it is equipped with a high definition color video camera, with one in black and white to be used in low lighting conditions, and with a thermal infrared camera which can detect objects within its operating range by the heat they release (for example from the engine).

On top of all this, it is equipped with a GPS positioning system which allows to stay constantly in touch with the mother boat and operate around it. By flying circles around the boat, it creates a perimeter which is kept under constant surveillance, and as soon as it detects the movement of an object big enough to be considered as a possible threat for the vessel and the people on it, it will immediately inform them by sending an alarm on board, allowing everyone to get ready for a confrontation, or for an escape towards a safe harbor.

In times when pirates are taking advantage of modern technologies and techniques, and attack in swarms with light speedboats, it is important to be prepared and adopt a suitable defense system. Of course, the Crows Nest micro surveillance helicopter can also be used to defend sensitive targets on the mainland, for example by monitoring the territory around your home, especially for those who live in a villa with a large park around it and want to protect themselves against unwanted guests, not only pirates at sea, but also those swarming the city seas!