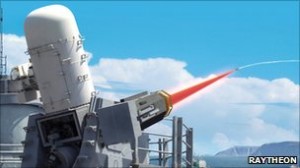 There is not a single day when we do not read news about new UAVs (Unmanned Aerial Vehicles, the so-called “drones”) being launched on the market or in design phase, and most of the armies from the Western hemisphere are widely using this kind of devices for reconnaissance or attack missions, to spy behind enemy lines, launch quick attacks or carry heavy equipment without putting lives at risk.

Of course though, enemies can also get devices of this kind, therefore, along with new and ever powerful UAVs, it is necessary to develop an adequate technology that allows armies to defend themselves when it is the enemy that uses this kind of weapon.

For this reason, during the recent Airshow which takes places in Farnborough (UK), the US-based giant Raytheon has showcased its CIWS (Close-In Weapon System) laser gun, which can be used alone or supported by conventional guns, to counter the threat coming from above shooting a single laser beam, invisible to the human eye and around 50-kilowatt strong, which is capable to bring down drones, rockets, mortars and small boats, with extreme precision.

Of course, its efficiency should be put to a harder test, for example against armored jet fighters traveling at much higher speed than a drone, with a human pilot who adds more flexibility to their defense capabilities. In any case, CIWS is an important defense against reconnaissance missions carried out by unmanned aircraft, and can allow for a higher efficiency of behind-the-lines maneuvers, preventing enemies from spying each and every move; all this, naturally, while keeping personnel safe and minimizing the risk of losing lives.