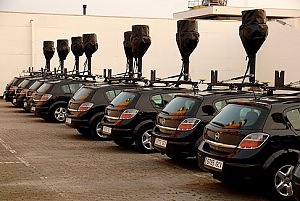 Google Street View? We often happen to read funny news about people finding out that they have been photographed by the ubiquitous miniature cars that gather photos for Google Street View.
If for most of us, ending up on the search engine might be something to be proud of, or play the cool guy with friends and girls, unfortunately not everyone has the same idea.

Why to remove yourself from Google Street View?

For example, in Germany, Google Street View gave owners of buildings in 20 German cities the possibility to opt out and request their building to be hidden from view, to avoid privacy problems which, for government buildings, may become dangerous in case of terrorist threats.

The problem is that the decision of opting out must be made within a time limit of only 4 weeks. Once the deadline is expired, users from these 20 cities will no longer be able to remove themselves from Street View, while people living in other cities will still be.

If building owners could run into trouble to have their properties removed, there is now a software which can remove people who should accidentally find themselves on Street View and find it inconvenient, for example, showing themselves where they are not supposed to be (for example, near their lover’s house…).

For those who don’t want their privacy threatened by Google’s mini cars and their cameras, this software can electronically remove a passer-by’s image. Basically, it identifies any human shape, and replaces it with background images taken from the shots immediately before or after.

Sure enough the resulting image could look strange, as sometimes it leaves a shade in place of a pedestrian, while in other cases, the only sign of a previous human presence before the treatment could as well be… a pair of feet with no body attached!