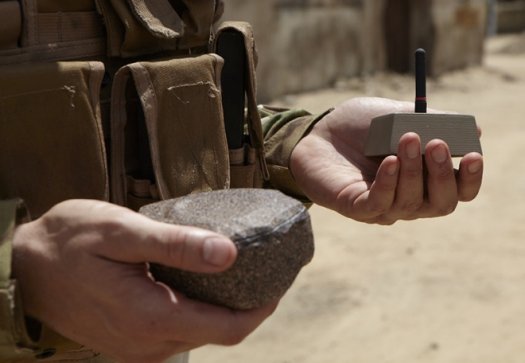 Even during the Cold War, the involved parties have used covert listening devices to remotely obtain information on what the opposing party was programming, listening to what was happening in rooms, buildings, or in the case of East Berlin, an entire city. But in America’s cooling war in Afghanistan, U.S. forces are now able to take what could be the largest operation of interceptions of all time by installing sensors throughout the nation, that are able to inform the U.S. Military Intelligence from within that country for the next two decades.

New spying devices are, in fact, available fot the American Army. Actually, these palm-sized devices are not hidden listening devices per se, but sensors which can detect all the movements nearby and report them back to an intelligence outpost, letting special operators know when a remote mountain pass or a known smuggling trail is being utilized.
Some of the sensors could be buried, some disguised as rocks or other geological artifacts.

These types of Unattended Ground Sensors (UGSs) have been used previously, particularly in Vietnam. But these new sensors consume a fraction of the power and their batteries are rechargeable by solar energy, allowing them to operate for up to two decades, if estimates are correct. Several companies have already shown their interest in UGSs, and not all in the military.

Moreover, the ground sensors can be equipped with audio, seismic and radar instruments that would constitute a really effective surveillance system able to cover the entire Afghan territory. As soon as a sensor detects some movements, the device sends the location of the suspect activity to surveillance airships above, spurring them to put more sophisticated electronic eyes on the area.
UGSs like these are already in use around the bases in Afghanistan and elsewhere, including along the border between the U.S. and Mexico, but the extent of eavesdropping on Afghan territory is enormous. This is what happens when certain technologies become ubiquitous and the cost per unit decreases (just $1,000 per device).

2 thoughts on “UGSs (Unattended Ground Sensors). How to remotely control an entire nation”