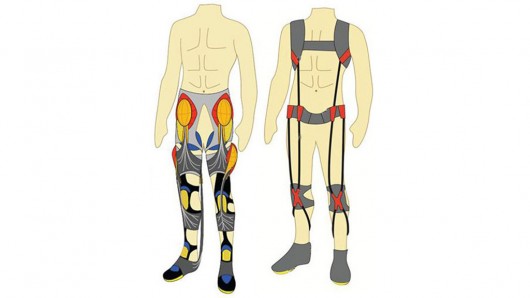 We are accustomed to different instruments used by law enforcement and military for self-defense purposes and to strengthen human capacity. Man is transformed, thanks to technology, in a veritable superman, combining intelligence, human natural strength and robotics.

They range from simple dresses with rubber bumpers, which provide effective protection against impact, protecting the wearer’s body, to more complex instruments, real armours that allow, among other things, to raise weights that otherwise only a man could not carry. The only limits of the armour are the weight , the inflexibility and the fact that sooner or later the device run out of batteries, becoming not only totally useless but also a burden to those who, instead, should have greater skills on the battlefield, in police or rescue operations.

For this reason the DARPA (Defense Advanced Research Projects Agency) has hired the Harvard’s Wyss Institute for Biologically Inspired Engineering, to create a military uniform that includes a new HULC, a Human Universal Load Carrier, that is a tool that would help soldiers to lift weights that otherwise one man could not endure. The new device, according to researchers is more lightweight and flexible than its predecessors, although there is still the problem of poor battery life that, however, according to the Institute, might be solved by the use of fuel cells.

The new device, comfortably worn under a regular uniform, is going also to have a sensor that detects the fatigue of the wearer and, by practicing him a real massage with vibration, allows to increase the resistance for certain physical efforts.

An investment of $ 2.6 million, which is leading to the implementation of a tool that will reveal its usefulness not only in the military but also in the civil. Think about the use of the “smart suit” in rescue operations or in the assistance to people with disabilities!