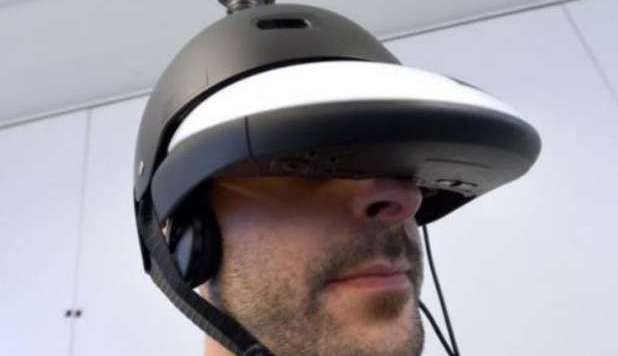 It’s called Flyviz the 360 helmet and has been designed by a team of French scientists of INRIA (National Institute for Research in computer science and automation).

The helmet to see the reality at 360° offers an instant overview on the sides of the body and on the back. This prototype, presented first in Paris, then at the conference “Virtual Reality Software and Technology 12” of Toronto, could have great applications in surveillance and security fields because it allows real-time to detect dangers around himself. The patented system is based on items currently available on the market: a digital micro camera, a laptop, an helmet and a display.

Therefore, the 360 helmet works thanks to a digital microcamera connected to the upper part of it which, pointed towards one hemispherical mirror, allows to acquire images at 360°. The images would result distorted, as if we looked at the world from the reflection in a sphere. At this point the computer connected to it, corrects the visual, making it perfectly adherent to the reality through the technique of the spherical projection.

Once completed the perfecting, the images are transmitted, with a transmission delay of only 83 milliseconds, on a small screen located inside the helmet, in front of the eyes of the observer and gradually to the right and to the left.

Apart from the applications that the instrument could have in the military sector, the helmet was designed primarily to study human perception. In fact this isn’t a “virtual reality”, but an increase of the natural visual field of the human being. Of course to learn to use it, you will need of an initial training.
If the device will enter into common usage, many sports enthusiasts who want to emphasize their feats with high level videocameras will also enjoy.