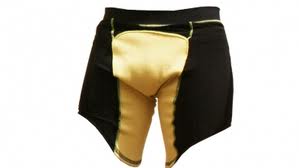 Soldiers patrolling the streets of Afghanistan on foot usually face a number of dangers that surely they would not find if they were in a tank. One such risk is posed by improvised explosive devices (or IED), which often cause the loss of limbs or damage to the “boy parts” of the body.

Bulletproof underpants can be your savior

For this purpose a system of pelvic protection has been developed which comprises two layers: an under-garment, called “PUG” and a protective outer-garment, called “POG”. Both components can be worn as shorts. The PUG is easily worn under pants instead of underwear. It looks very similar to cycling shorts but it has, of course, a level of military protection. The POG, instead, is worn over the PUG and is even more protective and resistant.

Although the bulletproof underwear certainly can not completely protect these men from something like a IED explosion, this special underwear not only protects the femoral artery, thereby preventing loss of blood that can be fatal, but it also helps to reduce infections, often caused by particles of the explosives material.

The PUG is made of a breathable, moisture-wicking material along the outer thighs. The inner thighs, instead, are made with a knitted Kevlar to protect the flashy parts and the aforementioned femoral artery. Over the groin there is another layer of knitted Kevlar. These clothes are washable, weigh in at just under three pounds and they probably will be sold for about $ 95. We don’t know anything about available colours yet.

These garments are surely very useful not only for soldiers, but also for those who find themselves in situations that require some protection for the flashy parts of their body, while allowing perfect mobility and agility. No longer, therefore, only bulletproof clothing and dresses with rubber shock absorbing pad that allow you to secure rigid parts of the body, but also more security for the soft parts, easy targets in contexts of armed clashes or other.