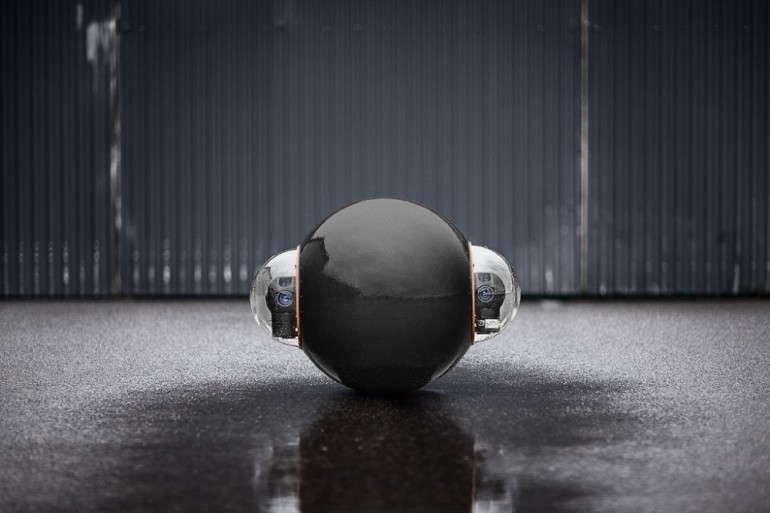 Remote-controlled unmanned ground vehicles (UGVs) or a robot have proven very useful in military applications, but several industry studies show that they can also be applied to civil security.

A good example of these tools is the GroundBot, produced by a Swedish company. Able to roll in the mud, in sand, snow and even float on water, this particular robot has a spherical shape and has a couple of cameras that allow the remote operator to see everything that is happening around in 3D.

The Surveillance Robot That Can do It all

Remotely controlled or programmed through an indipendent system, based on GPS technology, GroundBot can be equipped with cameras that allow a 360 degrees and night vision (IR), microphones and speakers, as well as sensors for the detection of radioactivity, gases, moisture, fire, heat, smoke, biological materials, explosives or drugs.

GroundBot Surveillance Robot  has all its sensors and cameras well protected inside the sphere sealed to prevent sand, mud, gas and water from entering. This makes it particularly suitable to detect gas leaks. Also resistant to overturns, drops and knocks. It can move and rotate in multiple directions with acceleration and deceleration. GroundBot is driven by a patented system with a pendulum mechanism. To start the rotation, the built-in motor raises the pendulum located inside the sphere, thereby changing the center of gravity. This brings the spherical robot to roll in the desired direction.

With a speed up to 10 km / h (6 mph), the Surveillance Robot can be used on any type of ground or surface, even on a smooth and paved one. It can run up to 8-16 hours, while it takes 3-4 hours to recharge the battery. Equipped with a housing made of polycarbonate with a high friction coating, the size of this instrument is comparable to a car tire, measuring 60 cm (23.6 inches) in diameter, while the weight of 25 kg (55 lbs).

An instrument, therefore, that joins to other surveillance systems of this nature, such as robots equipped with wireless webcam, or of any other nature, such as the 3G spy cameras, more discrete and with a slightly different use. The robot, infact, is best suited for surveillance in places such as airports, railway stations, power plants and warehouses, and for applications such as perimeter protection and monitoring of events at the stadium, that is for all those places or events that require monitoring on the move.