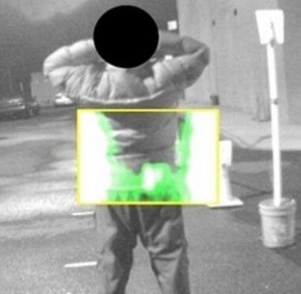 Among new technologies, useful either for personal and civilian defense or espionage, we have already heard about tools like a scanner pen that can scan documents and send them via Bluetooth or email, or devices like a through wall radar, useful to find kidnapped people or survivors in natural disasters like earthquakes.

Scanner Pen That Can Scan All

A new instrument is cornering the market and is showing its usefulness in American police forces. The New York Police Department, in collaboration with the Department of Defense of the United States began, three years ago, to develop a portable scanner pen that can detect from a certain distance the presence of a gun, or any other weapon, on a person’s body.

The system, which uses infrared rays to detect the radiation emitted from the body of a person, each time that a solid object made of metal prevents the rays to reach the body, makes it appear on the scanner screen the shape of the identified object.

The body scanner works from a distance of about one meter (three or four feet), although Commissioner Ray Kelly of the New York Police Department hopes that the range will be extended up to 25 meters (82 feet).

The device should be mounted on police cars and would be used whenever there is the need to frisk someone without putting hands on him. It is a really useful tool for law enforcement, as it allows people to be body searched at a distance without the police officer coming into contact with potentially dangerous weapons.

Of course, a biggest step would be to extend the range, as already recommended, but, even in its present condition, the scanner is a big step forward for the safety of people and police officers that everyday face difficult and dangerous situations and cases. And last but not the least, this device would take away the embarrassment of touching a person to frisk him/her.