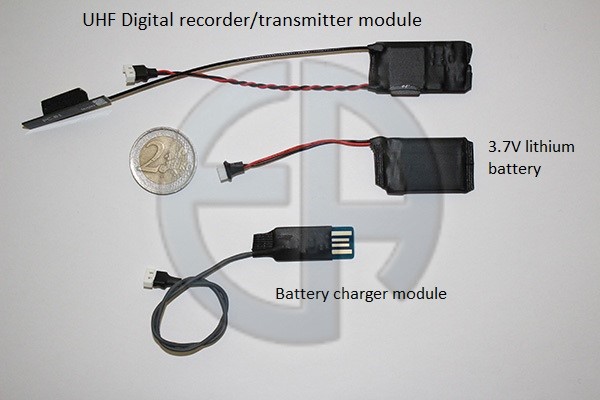 According to our survey about audio surveillance systems, many investigators and security operators have showed more interest in voice recorders rather than bug transmitters. At first glance, it would seem that a spy bug transmitter, working on radiofrequency or GSM network, is less valuable than a recorder. Not to mention those surveillance operators who still stuck on the rosy notion that a bug transmitter must necessarily concern only few specific investigational needs. But is it really like that? Let’s see below what are the benefits of using both devices in your investigations.

The unquestionable application qualities of a spy bug transmitter

When we talk of spy bug transmitter, the first question that comes to our mind is: how to put it on long time charge? You know, one of the most common problems raised by bug users are linked to power supply, especially if the device must be used for many days straight. In fact, it is not always possible to retrieve the transmitter for changing batteries.

So in such cases it would be usually best to connect the bug to the mains directly, so that you will not have to worry anymore about duration time. What are the main advantages of an audio bug? Well, first of all the immediacy of results, I mean the ability to get audio information in real time, as well as miniaturization or unlimited use from any distance when it comes to GSM bug working on mobile network.

The incredible functional versatility of a micro recorder

Now let’s go to analyze the basic advantages of a micro recorder. The main use of a voice recorder to be used in investigative fields is as known the collection of evidence for the defence. Anyway this is not the only reason why it is such demanded: think for example of its ease of concealment, its ability to start voice activation recordings automatically or by calendar, to say nothing of its very low battery consumption. In fact, some micro recorders can be connected to batteries so to allow even up to 45 days of recordings!

Hence from our excursus comes out a rather variegated picture of the two devices, although the issue tips the balance in favour of the recording devices. So how to behave? Is it still worthwhile using a radio bug or a GSM spy bug transmitter? Of course yes! As those investigators who follow us probably know, bug transmitters are substantially different from micro-recorders in their scope. In that case there’s nothing to do but reiterate: if your goal is to immediately start investigating, or you are miles away from your target, well, a GSM bug is fit for purpose!

Finally, for those who are looking for a system owning both a bug and a recorder, we report this kit (insert the password: –  endoacustica 2016  –  to enter) which provides both functions in a single unit.