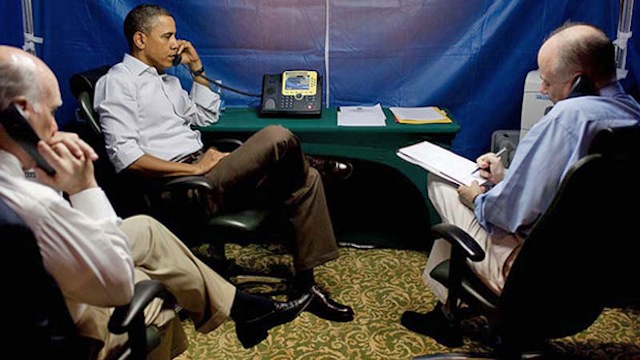 The U.S. President, Barak Obama, certainly knows what are interceptions. Every time that he passes the night in a hotel, his staff assembles a tent. No, not a game for his daughters, but a protection in order to securely communicate with employees. The anti spy tent in fact protects him, thanks to a special fabric used to isolate and protect sensitive communications and speeches from prying eyes and ears. Furthermore, the anti bugs system is equipped with an apparatus called “white noise generator” capable of generating a noise that prevents bugs and micro voice recorders to transmit or record what happens inside the tent.

It seems that the security agents of the White House, take it for granted that the President is spied wherever he goes, so they are equipped to protect him. The anti spy tent is used to protect a variety of situations: read a secret document, make a call, use a computer or speak with other members of the government.

Our photo, for example, published by the “Times”, shows Obama in the tent in a Rio de Janeiro hotel, while talking on the phone of the latest developments in Libya. But the tent is not the only precaution taken by Obama. The president uses a phone impossible to intercept, shielded precisely to prevent eavesdropping, and it’s very likely that in his limo, which follows him wherever he goes, are made constant environmental bug sweeping to avoid the presence of any hidden bugs.

These defenses are mandatory for all members of the administration who receive a smaller structure similar to a phone booth. All other devices are practically prohibited, especially in rival countries like Russia and China, and after every meeting in the room of foreign governments, all equipment are subject to bug sweeping.